Marvel’s Eternals actually has the potential to beat every other comic book movie coming out next year (including Wonder Woman 1984). It has a diverse cast of young, familiar & big-name actors. All of the Eternals are going to be unique as everyone would possess a different set of powers, but the most exciting of the bunch have to be Angelina Jolie’s Thena & Richard Madden’s Ikaris.

Thena is a telepath and can even Teleport. Manipulation of light, fire & Matter are some more of her other powers. Born as an Azura, she got her name changed by the Royal Decree. She comes in the second generation of Eternals, being the daughter of Zuras, the leader of Eternals on Earth. Zuras will supposedly play a very small role in the film as Salma Hayek’s Ajak has been announced as the leader of the group.

A while back, we got to see Jolie on the set of Eternals having dyed her hair blonde to portray Thena. The outfit she was wearing did seem to be from the ancient times that will be portrayed in the movie (reportedly 800 BC). But now a new set photo has surfaced and it shows the Superhero suit that Thena will be wearing, probably in the present times since Eternals is only partly taking place in the past. Here’s a look at the superhero suit, take a look: While this is a pretty blur photo with a lot of noise, it does seem that the suit involves more white than the prominent gold we’ve seen in the comics. Perhaps more white and only a bit of Gold is a better idea because in the same year, Wonder Woman 1984 is also releasing and the amazon warrior will be wearing her Golden Eagle suit which will be all gold from top to bottom. The last thing Marvel would want is a statement saying they copied DC. 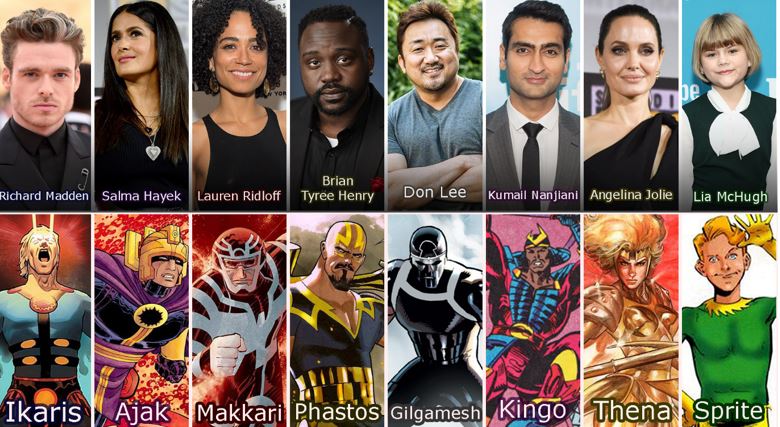 While Thena seems to be quite exciting, we cannot rule out the other interesting characters from this movie. Ikaris, Phastos, Sprite, Makkari, Gilgamesh, Ajak, Druig, Sersi are all going to be quite interesting. Then there’s also the entry of Black Knight which will happen in Eternals itself. There are quite a lot of rumors running around for this movie. Some say that the Eternals could actually be introduced through the multiverse. There’s even a plot leak which suggests that the Eternals have all actually forgotten about their powers and have been living as humans. At this point of time, everything that hasn’t officially be confirmed should be taken as a pinch of salt. Here’s what Kevin Feige said of the Eternals in an interview last year:

“You’re reaction about not being familiar with the Eternals is perfect, because most people weren’t familiar with Guardians [of the Galaxy] and believe it or not there were people that were not familiar with Avengers or with Iron Man. So for us, its finding great stories whether people have heard of them or not and bring them to the big screen in as amazing a way as we can.”