10 of The Most Stupidest Looking Weapons in Marvel Comics – Ranked

When it comes to weapons, Marvel Comics seldom lets us down with the number and variety of weapons they have at their disposal. But not all weapons that Marvel has is as trendy or fashionable as you think. Sometimes, the looks of the weapons make it look like people cooked up those designs while they were drunk. Some are so ridiculously funny to look at we wonder how they were even allowed to go pass the screening board.

Doctor Doom and Reed Richards have sworn enemies and will remain as such forever. The major reason they are enemies is that both are so smart that most of the time, they find it hard how to out-smart each other. Doom once challenged Reed Richards to find out who is actually smarter of the two. Reed Richards, in Fantastic Four Annual #2, reveals he has just the right weapon for the job. He unveils the Encephalo Gun, a weapon that measures the intelligence of two opponents who put their foreheads onto two tubes on the top of the gun. Whoever is less smart, will be transported to another dimension. Doctor Doom was drugged by Reed Richards into thinking that the latter was transported to that dimension so we never really got to know if the weapon does work or not. The Ultimate Nullifier is such a powerful weapon that even Galactus, the freaking Destroyer of Worlds, fears it. And he keeps it locked up on his ship. It is a weapon that can wipe out entire realities and timelines. One push of a button and anything that the wielder wishes to be scrapped out of existence is then wiped out entirely from the cradle of creation. The Ultimate Nullifier is the weapon that finally forced Galactus to let go of his thirst to consume Earth and leave the planet be. In the comic books, the weapon has been used quite a couple of times. But the weird-looking weapon has one disadvantage though. The user himself has the chance of meeting death if he decides to use it.

Hank Pym is the smartest mind in Marvel Comics, hands down. He is the one that created the artificial intelligence Ultron and discovered the Pym Particles. For a guy with such incredible scientific achievements, it would be hard to believe that one of his inventions that he prided himself on was the catapult. As Ant-Man, due to his small size, traveling could be a huge hassle. To work around that, he created basically an air gun that propels him forward up to miles. To land, he would just make a pile of ants that would serve as a cushion. A lot of ants would senselessly die in the process every time he makes a jump. Chase Stein is a member of the Runaways, children who belong to families that are very ‘special’. Chase Stein, just like the rest of the Runaways, has access to a unique set of skills corresponding to the stronger suits of his family. The weapon he uses in battle is called the Fistigon and it looks just as weird as it sounds like. Fistigons are extremely powerful but need a better name and a way, way better design. For now, they just look like a pair of Siberian Gloves made out of metal. It looks cheap and does not do justice to the level of power it holds.

The cosmic Control Rod’s design is so simple it almost looks like the designers ran out of ideas while thinking of something. Basically it is a futuristic piece of alien technology that crash-landed on a planet and was then consumed by Annihilus. The rod allowed him to accelerate his evolutionary process but it looks like basically a pill. There are Iron Man suits from the ’70s that look more refined than this thing. To see modern-day comics feature the Cosmic Control Rod just like how it was portrayed when it debuted, with literally no changes to its design, is a shame.

6. The Golden Ankh of Moon Knight

The Golden Ankh of Moon Knight sounds very fancy and unique but trust us all it ever was is a glorified Truncheon. First debuting in the Werewolf by Night comic book series several decades ago, Moon Knight soon starred in his own comic book series and was later given a huge face-lift. He had his own moon themed shurikens and even a moon themed helicopter. But never in a million years we would have thought that the Priest of Khonshu will give Moon Knight an Ankh themed truncheon. To top it off, it was actually designed by a time-traveling hawk-eye. That is just way too much detail for stupidity. Okay, Norman Osborn is a force to be reckoned with. He is a genius and a very cunning supervillain. But there are times we fell like the guy has his downs. Take for example the Kingslayer Mark 1. It is a mechanical beast housing hundreds of weapons hoisting a level of firepower that could be enough to conquer a small nation. But the chink in its armor was the design. The Kingslayer had chicken legs and a very bulky top. If Spiderman wanted to defeat that mechanical monster, all he needed to do was give that thing a hard push and it would have been impossible for it to stand back up. 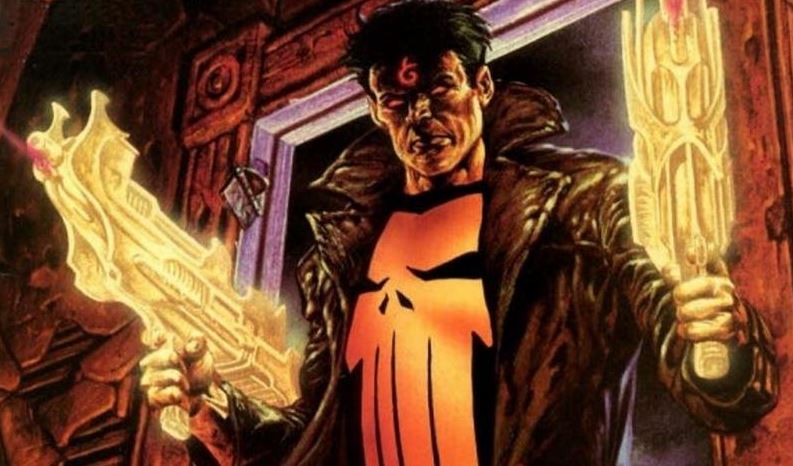 Frank Castle is a complicated man. He does not like violent criminals pestering and feeding off of innocent lives but he is willing to vent out a similar form of punishment on such people. The Punisher once decided that he has had enough of the world and committed suicide. Frank Castle was later resurrected as the living incarnation of Death, hunting down the unworthy with biblical superpowers. But that was not the only highlight of the series. This Punisher series ended very badly but fans also hated how the comic book series gave him a pair of blessed, angelic superweapons in the form of a pair of submachine guns.

The real name of the sword if Ragnarok and it is said in a prophecy that the moment this sword is swung, the End of Days will begin. Odin stole the weapon from the fire demon Surtur, who is supposedly the harbinger of Ragnarok. The Odinsword made this least not because of its design. It looks like a normal looking sword. But the size of the weapon is humongous! The Odinsword could be a broadsword for even a Celestial. It took Odin the strength of every Asgardian God except Thor, and the Destroyer armor, to even lift the sword and fling it into a Celestial. The Phoenix Blade was probably created by someone who is a fan of the Berserk series. The design is very similar as a matter of fact. But the wielder of the Phoenix Blade, Korvus Rook’shir, is not at all at par with Guts, the lead character of the Berserk series. The Blade of the Phoenix is just a weird-looking, over-sized sword with an extremely blunt blade that literally nobody else other than Korvus would be able to wield in battle.

The post 10 of The Most Stupidest Looking Weapons in Marvel Comics – Ranked appeared first on QuirkyByte.